Courtesy of YouTube and the Robert H. Jackson Center 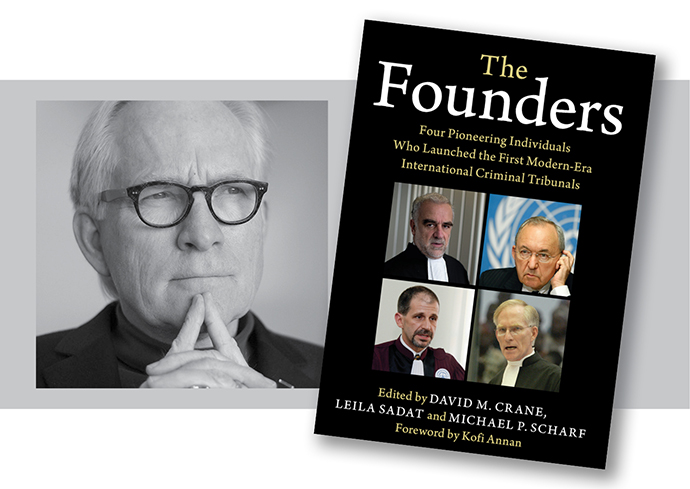 Never before have international chief prosecutors written in detail about the challenges they faced, but with the publication of “The Founders”—co-edited by David M. Crane, professor of practice in the College of Law; Leila Sadat of Washington University School of Law, St. Louis; and Michael P. Scharf of Case Western Reserve University School of Law, Ohio—comes the complex story of four individuals who created the world’s first international tribunals and special courts.

A candid look at how the founding prosecutors sought justice for millions of victims, the backdrop to these tales is four of the most appalling conflicts of modern times: the Balkan wars in the former Yugoslavia (1991-2001), which included the Bosnian genocide and led to hundreds of thousands of casualties and displaced peoples; the 1994 mass slaughter of Tutsi in Rwanda by members of the Hutu majority government; the Cambodian genocide (1975-1979), perpetrated by the Khmer Rouge; and crimes against humanity committed during the Sierra Leone Civil War (1991-2002). The crimes against humanity and war crimes committed during these conflicts spurred the creation of international tribunals designed to bring the perpetrators of unimaginable atrocities to justice.

When Richard Goldstone, David M. Crane, Robert Petit and Luis Moreno-Ocampo received their orders from the international community, each set out on a quest to build unique postconflict justice mechanisms and launch their first prosecutions. South African jurist Goldstone founded the International Criminal Tribunal for the Former Yugoslavia, which indicted 161 individuals between 1997 and 2004. Crane was the chief prosecutor of the Special Court for Sierra Leone from 2002 until 2005, indicting, among others, then-President of Liberia Charles Taylor for his role in crimes committed against Sierra Leoneans. (Incidentally, Crane was the first American to be named the chief prosecutor of an international war crimes tribunal since Justice Robert Jackson at Nuremberg, Germany, in 1945.)  The founder of the Extraordinary Chambers in the Courts of Cambodia was Canadian Robert Petit, who led the investigation and prosecution of five of the senior-most leaders of the Khmer Rouge. Lastly, Argentinian lawyer Luis Moreno-Ocampo is most famous for becoming the first prosecutor of the International Criminal Court. During his tenure, which began in 2003, Moreno-Ocampo opened investigations into crimes committed in Burundi, Central African Republic, Côte d’Ivoire, Sudan, Democratic Republic of the Congo, Kenya, Libya, Mali, Uganda and Georgia.

“As we worked on this book it occurred to me the extraordinary professional and personal risk we took in establishing these ground-breaking justice mechanisms. We all had successful careers when we literally received ‘the call’ asking us to stop our life trajectory and to take on a task with absolutely no certainty of success,” says Crane, who continues to work on humanitarian and atrocity law issues at the College of Law, including with the student-run Syrian Accountability Project. “We were in unchartered waters, yet we were drawn to the possibility of bringing justice to victims of horrific acts. This we did, and we took up the flaming sword of justice. It was an honor and a privilege to be asked to found these international courts.”

With no blueprint and little precedent, each prosecutor became a pathfinder. “The Founders” offers behind-the-scenes, first-hand stories of these historic journeys, the challenges the prosecutors faced, the obstacles they overcame and the successes they achieved. Contributions are made by the founders themselves, as well as former United Nations Secretary-General Kofi Annan, Hans Corell, Leila Nadya Sadat, Michael Scharf, William Schabas and David Scheffer.

War Crimes Prosecution Watch is a bi-weekly e-newsletter that compiles official documents and articles from major news sources detailing and analyzing salient issues pertaining to the investigation and prosecution of war crimes throughout the world. To subscribe, please email warcrimeswatch@pilpg.org and type “subscribe” in the subject line.

Opinions expressed in the articles herein represent the views of their authors and are not necessarily those of the War Crimes Prosecution Watch staff, the Case Western Reserve University School of Law or Public International Law & Policy Group.

Democratic Republic of the Congo

Domestic Prosecutions In The Former Yugoslavia

—
You received this message because you are subscribed to the Google Groups “warcrimeswatch – War Crimes Prosecution Watch” group.
To unsubscribe from this group and stop receiving emails from it, send an email to warcrimeswatch+unsubscribe@case.edu.