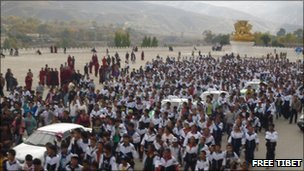 BEIJING, China – More than 1,000 Tibetan students marched to protest against unconfirmed government policies to mandate the exclusive use of Chinese language in classes.

The peaceful rally took place in and around Tongren, known as Rebkong in Tibetan, where it has recently witnessed widespread anti-government rioting in the spring of 2008. At the time, scores were arrested and a crackdown waged against Buddhist monasteries, capturing the world’s attention before the Summer Olympics in Beijing that year.

Some monks were to be seen amongst protestors on Tuesday, who, alongside students, shouted “equality of ethnic groups” and “freedom of language,” according to the International Campaign for Tibet. Free Tibet, the London based campaign group, and U.S.-funded broadcaster Radio Free Asia estimated the total number of participants at anywhere from 1,000 to 7,000.

Students from half a dozen schools gathered and marched together, chanting slogans against unconfirmed plans to supplant the use of Tibetans.

One of the teachers who also participated in the march said police did not intervene and students were not penalized by school administrators for partaking in the march.

“The students marched peacefully. Their only demand was for continued use of their mother tongue,” he said.

Although ethnic “Han” Chinese consists of more than 95 percent of Chinese population, there are currently 55 ethnic minority groups officially recognized by the government. Tibetans are one of them. Language, among other things, has been an emotional and complicated issue in Tibetan and other ethnic minority areas under Chinese rule.

While the government defends these policies by saying they aim to spur economic growth in the largely poor areas and better integration, many Tibetans fear the development of their areas and the migration of majority Han Chinese to them could destroy their traditional culture and ethnic identity.

The town’s schools use Mandarin and Tibetan alongside each other, and many teachers said there has not been official orders to switch entirely to Chinese. However, they said there are rumors and unconfirmed reports of a planned change in policy, which authorities never clarified.

“The Chinese are enforcing reforms which remind me of the Cultural Revolution,” another teacher said.

“This reform is not only a threat to our mother tongue, but is in direct violation of the Chinese constitution, which is meant to protect our rights.”